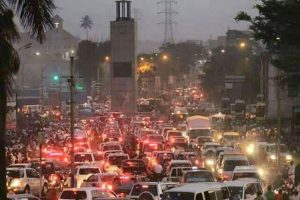 “Beauty lies in the Eye of the Beholder”
Thukydides

I’m warning you: this article is longer than the previous ones. That’s because I am taking you on a detour. What is known as ‘shortcut’ here in Kampala. Shortcuts are neither short, nor do they cut anything, except into your patience. They are, in fact, long detours taken in a desperate attempt to avoid traffic jam. But we’ll get there. Let’s first have a look at what Kampala traffic is.

Kampala traffic is comprised of thousands of taxis – Toyota vans that carry up to a maximum of 14 passengers. Or so it says on their front. Then you have more than 80,000 boda bodas – the Ugandan version of motorbike taxis, gigantic trucks that mostly come from Kenya, private cars and government vehicles. The most notorious hot spots for Kampala traffic are the roundabouts, where you can easily stay up to two hours when you come at the wrong time. 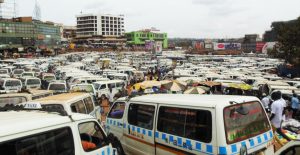 Above: Taxis in Kampala

For every 100,000 registered vehicles, 836.8 people die every year. In comparison, in Germany that number is at 6.8.[1] Mulago hospital has an entire wing reserved for victims of boda accidents. The crushed heads and severed limps department. Make no mistake: this doesn’t mean that these poor people are treated there. My guard was called to Mulago the other night, because his sister had had a boda accident. When he arrived, he found her on the floor, unconscious and still bleeding. Nobody had bothered to even put her on a stretcher, at least not until my guard handed over some bills.

There is a Highway Code. It lays out the Ugandan traffic rules. Every single rule is broken all the time by everyone. It’s amazing. Even the rules of common sense are lifted.
I’m disgressing. That’s important, because it will help you understand another feature of Kampala traffic: shortcuts. Everybody knows the shortcuts in Kampala. These are actually pretty long detours from the main roads that take you meandering over the hills with the hope of escaping jam. It took me some weeks so even muster up the courage to explore them. Getting lost in Kampala is quite different from getting lost in any other place I know.
The first week of my driving I had learnt that lesson. The first day I took a wrong turn at Clocktower, hence attracting the undivided attention of traffic police. ‘You broke the law of Uganda!’ said the face that appeared at my window. ‘I’m afraid so,’ I replied. ‘You! Broke the law of UGANDA!’ The officer’s expression was one of utmost disbelief. ‘So you said’ I said feebly. Incredibly, I had absolutely no money on me. Behold the stupidity! Alas, I was still new. Before I could lament my oversight any further, the Ugandan law had hopped into my car to direct me to the next ATM.
The following day, I took the right turn, but immediately after, took another wrong turn. This time I found myself in the middle of Owino market at 7am. I don’t think you realize what this means. Have a look at the picture below and remember I was in the middle of it. Driving a car. 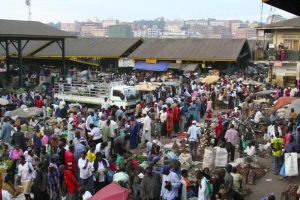 Above: Owino market. Imagine being stuck there with a car.

The following day came and went without any further wrong turns. I bought myself a smart phone and loaded google maps. For the first time in my life. I hate smart phones. I bought this one to never get lost again. For a few days things went ok. I was trying to adjust to the lady’s horrendous American pronounciation of African street names. Then that silly girl lead me into the hills of Buziga. Up and up and further and further until there were only canyons and dust. Had I not driven a 4-wheel drive, I’d still be there. Interested in some serious off-road adventure? Come on over. We have a guestroom if you ever find our house.

So, my reluctance to explore shortcuts may be explained. After some time, though, I did scout some alternative routes. Got lost, got stuck, got late, but eventually got to know them. For some time they did occasionally save me from jam. Then I went on maternity leave (yes, in Europe we still have those crazy communist ideas). I came back three months later only to find that a felt 10,000 people had also discovered the shortcuts. Now, they were not only much longer in terms of distance, indeed, traffic was a lot worse on those roads.
I felt what some of you might feel right now: What the heck, this lady says she writes about the beauty of Kampala traffic and where are we now?

I told you, I’ll take you on detours. Now, let’s talk about the beauty of Kampala traffic: Eventually you always get there.

This has been the most important mantra and it holds true for Kampala and for this article. Eventually, you will always get there.

The first three or four months I hated Kampala traffic. In the mornings dreaded getting into that car and drive to town. In the evenings I loathed getting back into the car and drive home. During that time, I got lost, I had a taxi tear off my car’s left side, had another one bump into my back; I got stuck at Entebbe roundabout and saw the sun set, continuing my journey with dark people wearing dark clothes wandering in the middle of dark streets. Once the sun sets, people are out on the streets. Literally on the streets. So, I try to see them before I hear them with cars coming up flashing their full beams or none at all. Interesting taxis that only have one light so that I think there is a boda on the far right and in the last instant realizing that there is a whole van attached to that light, most of which is on my lane.

But the worst was, I was upset all the time. For every half mile you drive, you’ll have some ten taxis cutting their way in from the left (this is left-side driving), you’ll have at least 30 bodas cutting their way in from all sides, the car in front of you will indicate right for ten minutes only to then abruptly break and turn to the left. At least four pedestrians and two goats will suddenly decide to cross the street without so much as throwing a glimpse in your direction. Two or three cars will come straight at your while overtaking someone.

Then one day I had enough. I sat down and thought about my options. I had to work five days a week downtown. No changing this fact. I had alternatives to driving myself. The cheapest was taking a taxi myself, which would have taken me about 5-6 hours of traveling every day to and from work. Nope.

The second cheapest option was taking a boda every day. Apart from my limited interest in spending time on the Mulago boda wing, I knew that every time I had taken a boda, the water turned reddish brown when I washed my hair that evening. Nope.

Take a special hire or what we would call a real car taxi. Well. Some thirteen years ago I got myself a private pension plan. Green and ethical it had to be. After twelve years I discovered that my green ethiccal fund had netted me a loss of around 60%. So I took the little money that was left and instead of enjoying a green sustainable retirement I spent it on a gas guzzling 4x Nissan. At least my children would have car seats.

Now, I hadn’t made this investment only to leave that car at home and spend yet more money on special hires. So, the fact that I would drive my own car to work was another one I wouldn’t change.
Most definitely I wasn’t going to change the fact that people break traffic rules all the time. I was not going to change Kampala traffic. Was there anything I could change?

There was. My own mind. My attitude. My perception. I gave myself two breaks: whenever I had to stay late at the office with the prospect of sun setting before I got home, I would leave the car at work and take a boda. And if I got too stressed out I would afford myself a driver for a day or two before returning to drive myself. Then I took one simple decision.

I accepted Kampala traffic. I accept there are no rules. I accept taxis entering my way. I accept bodas cutting my way. When I see them, I slow down to give them space to cross. I let everyone in. I smile at people. I stop and wave to let pedestrians know they can cross. I take care of everybody around me. I use my common sense for all of us.

The effect has been amazing. And immediate. I’m not stressed out anymore. That’s no surprise. What surprised me is this: People stop and flash their lights to let me in. For every taxi and boda that cuts somebody’s way, there is somebody who allows it. Somebody who forgives. People smile at me and thank me. I had seen only enemies. Now I see friends. They are there. And for all the craziness, Kampala traffic works. We all get there eventually. Just accept. And forgive.

It doesn’t work every single day. A few days ago I had entered the roundabout and a huge bus sped up and forced its way into my lane. The driver looked at me and made a gesture that basically said ‘you stop right there!’ At least that was my perception.

It pissed me off. But I smiled at the driver. Only the middle finger of my right hand that rested on the steering wheel, lifted up ever so slightly. As I stood there with my window open I heard someone laugh out loud right next to me. I turned and looked into the face of a boda driver. He had seen my little gesture, and he couldn’t stop laughing. For a moment I was embarrassed, then I had to laugh, too. He laughed and I laughed. We laughed. Then we moved again, each our own way.

Make no mistake: I don’t enjoy driving in Kampala. Given a choice I’ll always opt for pedaling happily in Munich’s parks or riding The Ghan to Alice Springs or taking a stroll along Big Sur. But as long as I have to drive this car here, I’ll do it. I’m ok with it. I’m at peace. Thank you, Kampala traffic, for teaching me that lesson!

P. S. I got rid of that smart phone after one month. Much better!

I am a coach. I help you create the space to let go and become free. My passion are simplicity and the power of purging.

If you want to work with me, drop me a line.